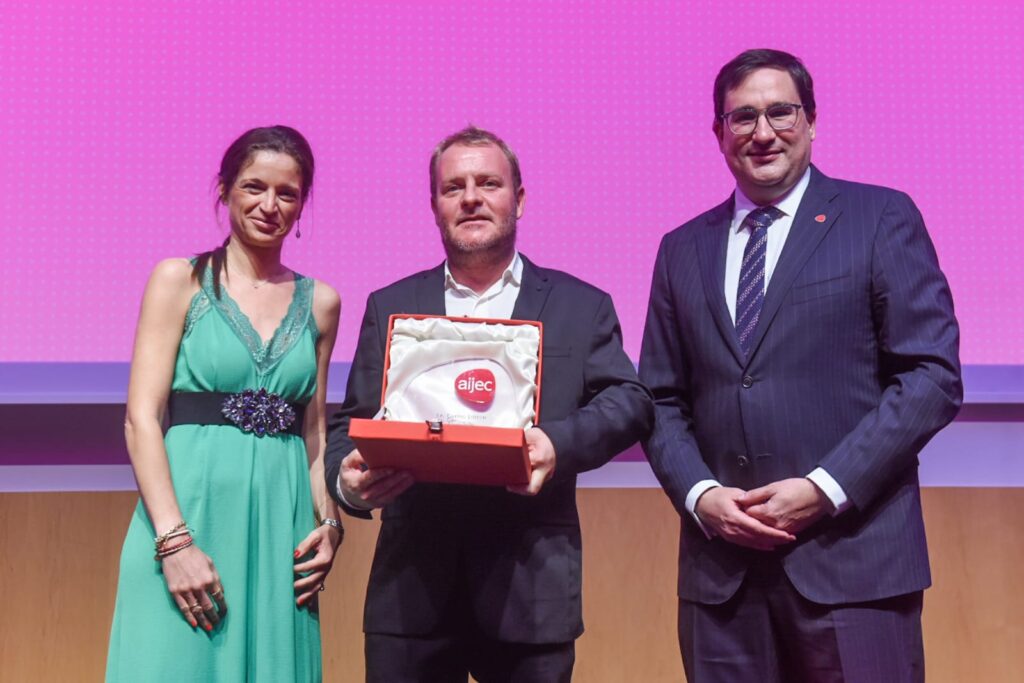 Carlos Duran, co-founder of the hoy-voy driving school chain, has won the Young Entrepreneur Award organized annually by AIJEC, the Association of Young Entrepreneurs of Catalonia, which recognizes him as the best young Catalan entrepreneur of the year. Duran has prevailed over the twins Eva and Maria Martin, from Tiendeo, and Oscar Pierre, from Glovo.

With this award AIJEC Young Entrepreneurs wanted to recognize the work of Carlos Duran at the head of hoy-voy, the first driving school in the world based on a low cost model. In 2012 Duran and his partner revolutionized a very traditional sector with a business model in which innovation has always been the main axis. With a learning system based on artificial intelligence and a dynamic pricing model similar to that which is standardized in airline companies, where students can choose the schedule of practical classes taking into account demand and price, today converted into the largest chain of driving schools in Spain with 39 centers spread throughout the state and a workforce of more than 400 people. Ten years ago, hoy-voy won the award for Best Business Initiative at the 2011 Young Entrepreneur Award.

The Young Entrepreneur Award, which this year reached its 29th edition, was presented this Wednesday in an event that brought together more than 250 people at the IMO Grup Miranza Convention Center and served to celebrate the work done by all young business fabric of the country.

The award for Best Business Initiative in this edition of the Young Entrepreneur Award went to BOLD. The company created by Bernat Carreras was born in 2019 as an engineering consultancy specializing in composite materials, mainly for Formula 1 teams, and has become a company that produces electric batteries for sectors such as aviation and high-performance vehicles. . In just two years of life, it already has a team of 70 people, an R&D center in the United Kingdom and facilities of more than 3,000 square meters in Montmeló.

BOLD has established itself in Trioteca, the mortgage technology company co-founded by Sara Orra and Wipass. the all-in-one solution that merges the physical and digital worlds to create a unique, immersive and connected experience within commercial establishments, by Mariam Ayadi.

AIJEC recognizes the drive for entrepreneurship by Santiago Tarin

During the act, the Recognition for the Best Professional Career was also given, which this year went to Santiago Tarin, businessman, co-founder and former president of AIJEC Young Entrepreneurs and promoter of the Young Entrepreneur Award. AIJEC has wanted to reward the work carried out by Tarin as a benchmark and promoter of the entity and creator of some awards that in 2023 will reach their thirty edition, consolidated as one of the most important entrepreneurship held in Catalonia.

The Recognition for Business Linguistic Quality of this Young Entrepreneur Award went to Electrofluxe, a company dedicated to the study, application and development of renewable energies. The award rewards the commitment to the Catalan language in a company in which, despite the different nationalities of the workforce, Catalan is the vehicular language.

The Recognition of Social Entrepreneurship, an award supported by CaixaBank, has been won by FitPlanet, a company born in full confinement when two passionate about outdoor sports and marine animals decided to make sportswear from waste to combat air pollution. the oceans, the planet and protect marine biodiversity.

The Recognition of the Future Entrepreneur, an award that rewards the best entrepreneurial project developed by people under 18 years of age, and which has the support of the Princess of Girona Foundation (FPdGI), has gone to the Dermoverse Project of 3rd and 4th ESO students from the Claret School in Barcelona. AIJEC Young Entrepreneurs wanted to recognize the entrepreneurial spirit of this group of boys and girls, finalists of the Junior Achievement competition, and who have created a mobile application that only with a photo allows detecting if a mole or blemish on the skin can reach turn into skin cancer.

«An award that concentrates talent and a spirit of doing things, creating and undertaking»

The president of AIJEC Young Entrepreneurs, Ruben Sans Solsona, wanted to highlight the work of the country’s young business community, which has been working for years on modernizing the economy, creating jobs and developing a new type of strategic leadership. For the president of the young Catalan entrepreneurs, these awards recognize the effort and determination of entrepreneurs to improve society and “concentrate talent and a spirit of doing things, creating and undertaking.”

During his speech, Sans Solsona called for more support for entrepreneurial talent from all areas, “with greater public-private collaboration, with an administration that really promotes digitization, that sends more aid, values ​​SMEs and the self-employed and the creation of a favorable environment to create companies where legal certainty and stability prevail”.

Finally, the president of AIJEC wanted to congratulate the entire group of young businessmen and businesswomen for being “”non-conformist dreamers, an example of overcoming difficulties, and the essential engine of change and transformation that allows society to move forward”.