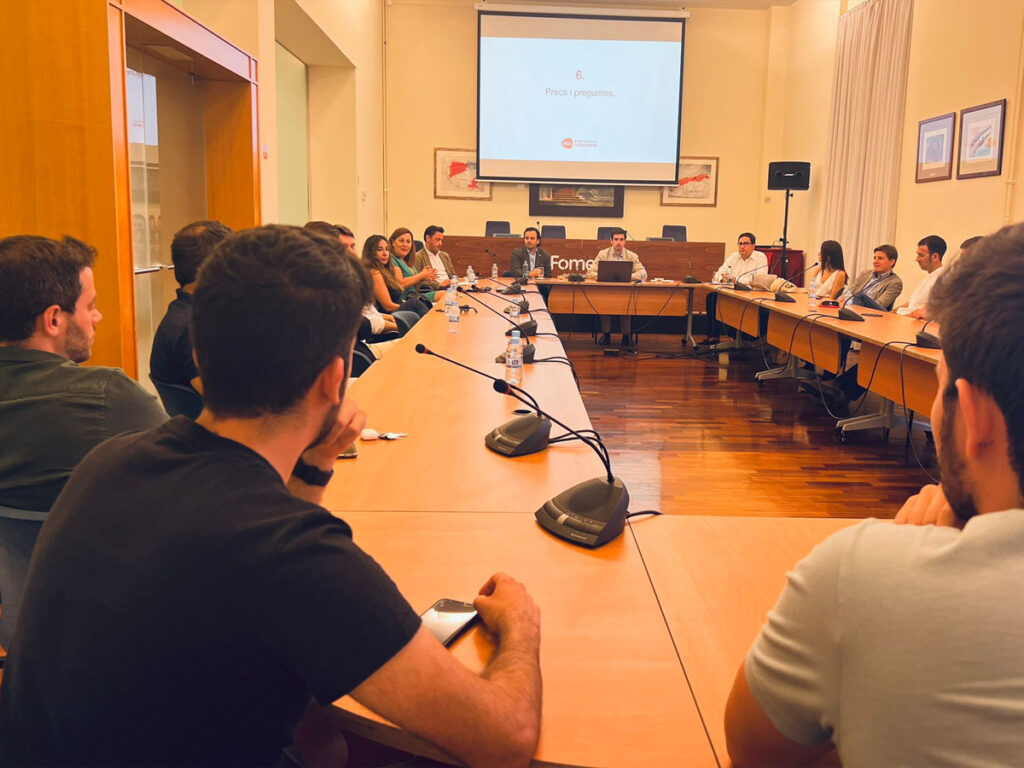 The General Assembly of AIJEC, the Association of Young Entrepreneurs of Catalonia, approved this Monday evening and by an absolute majority the re-election of Ruben Sans Solsona as president of the organization for the next three years. Sans Solsona begins this new stage with the challenge of continuing to raise its voice to defend the country’s young entrepreneurs.

After a first mandate marked by the pandemic, the president of AIJEC Young Entrepreneurs wants to continue working to create community and support entrepreneurial talent and young companies on their way to success. “We need to continue promoting entrepreneurial talent and companies so that young people feel proud to be entrepreneurs and so does the society that welcomes us,” reflects Ruben Sans Solsona. The president of the AIJEC believes that during these last two years it has been shown that the country’s business sector has a lot to say in the economic recovery and that it has been shown that companies are more necessary than ever. The discourse is beginning to change, but he warns that “we must continue to bet on generating entrepreneurs who demonstrate that without companies we will not go anywhere”.

During his first stage at the head of the AIJEC, the board headed by Ruben Sans Solsona, has focused on strengthening the continuous dialogue with the different administrations and has gained weight in business entities such as the CEOE, CEPYME, ATA, CEAJE ( where Sans Solsona holds the vice presidency from October 2021), Foment del Treball or FEPIME. Also on a European and global scale, AIJEC has gained a presence in YES for Europe, the European confederation of young entrepreneurs, and in the Ibero-American network FIJE.

During this mandate, the entity has also strengthened relations with other entities in the economic world such as FemCat, Cecot, Fira de Barcelona, ​​ASCEF or the Fundació Princesa de Girona, with which AIJEC signed a collaboration agreement this June.

For this second term, the businessman is accompanied by Estefania González (EQT Consulting) as vice president and Enric Sanahuja (MGA Group) as general secretary. Vicenç del Mar (HIDEM-SAS), Sandra Garcia (LIPPA Comunicación) and Lluís Feliu (EDEON MARKETING) complete the candidacy. Maria Josep Prats (1001 Cover) will be in charge of AIJEC Plus, the section of AIJEC that brings together those entrepreneurs who want to remain united to the association once they pass the 45-year mark.

Ruben Sans, a multi-entrepreneur passionate about computer systems and communications

Ruben Sans, 40 years old (1981), studied Telecommunications Engineering at La Salle-URL, where he also worked for three years in the Department of Telematics and served as an external lecturer. He has continued his training with certifications in network engineering and management training programs at IESE. His business adventure begins his business adventure begins at the age of 22, when working for another company he began to project his own company. Elstir, of which he is CEO and founder, is an IT, cloud and cyber security solutions company that was finally born in 2008. At the same time, Sans is a partner of Ecomotive-Solutions (HOLDIM), dedicated to innovation in electronic engine management to reduce polluting emissions and promote sustainable mobility. He joined the AIJEC in 2009 and for the last four years has been part of the board of directors of the association, the last two as vice-president.