Enric Asunción (Wallbox), winner of the Young Entrepreneur of the Year Award 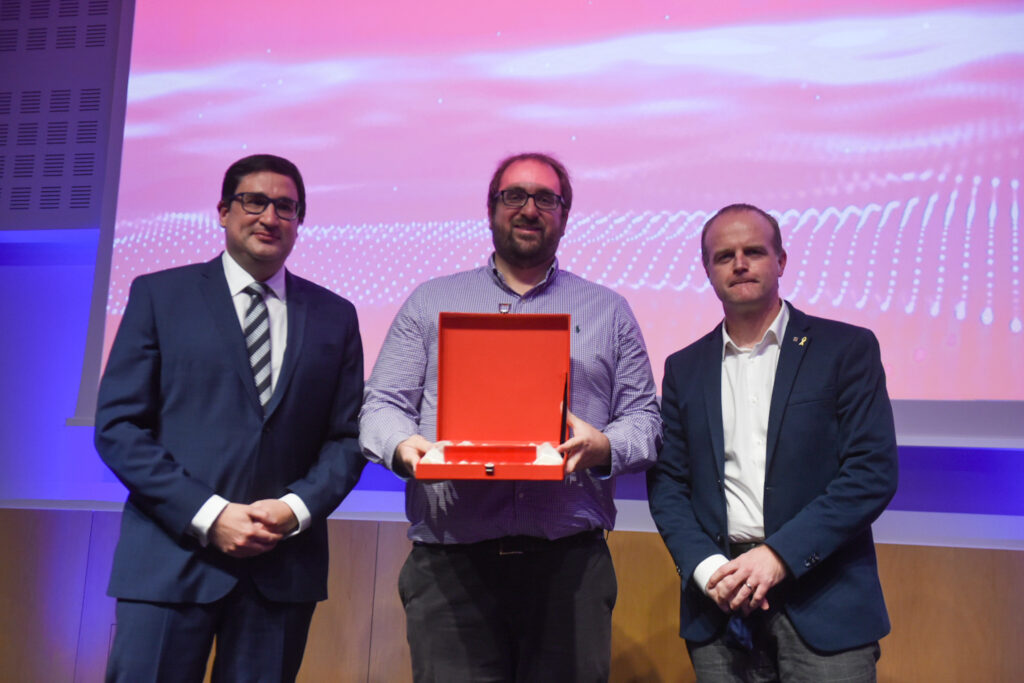 Enric Asunción, co-founder of Wallbox, has won the Young Entrepreneur Award organized annually by the Association of Young Entrepreneurs of Catalonia (AIJEC) and which recognizes him as the best young Catalan entrepreneur of the year. Asunción has beaten Josep Fajula, from OCA Global, and Pau Sarsanedas, from GPAInnova.

With this award, AIJEC Joves Empresaris wanted to recognize the work of Enric Asunción at the head of Wallbox and the revolution that the company is bringing about in the field of electric mobility. A leading provider of electric vehicle charging and energy management solutions worldwide, the company is headquartered in China and the United States and its chargers are sold in nearly eighty countries. Born in 2015, in just 7 years of life the Asunción company is already listed on the New York Stock Exchange.

The Young Entrepreneur Award, which reaches its 28th edition, was delivered this Thursday in an event that, after a year marked by the pandemic, has regained face-to-face attendance and was held at the IMO Convention Center, the Institute of Ocular Microsurgery of Barcelona. The award ceremony was attended by more than 200 people from the country’s business, economic and institutional world.

The Best Business Initiative Award in this edition of the Jove Empresari Award went to Blue Box. It is a biomedical device inspired by the olfactory system and olfactory neurons of a dog and developed with artificial intelligence to detect breast cancer at home, non-invasively and only from a urine sample.

The jury has valued the ingenuity of Judit Giró, its founder, to offer better health care to women around the world and to contribute her grain of sand in the fight against breast cancer. Giró has won over Meeting Lawyers, a company co-created by Claudia Pierre Trias de Bes, and Rokubun, owned by Xavier Banqué.

During the act, the Recognition for the Best Professional Career was also given, which this year went to Joan Font. The AIJEC wanted to reward the entrepreneurial career of the president of Bonpreu, which began in 1974 with the opening of its first establishment in Manlleu and which, 47 years later, has an entire network of supermarkets throughout the country, as well as gas stations and a retailer of electric power.

The Recognition of the Business Linguistic Quality of this XXVIII Young Entrepreneur Award has been for PocketPiano, the first pocket piano that allows you to play music anywhere. The award rewards the commitment to the Catalan language in the field of business.

The Social Entrepreneur Recognition, an award supported by CaixaBank, has been won by Nixi for Children, an emerging company that applies virtual reality to improve the relationship between children and the hospital environment, reduce the anxiety of sick children and thus improve their emotional well-being and also your health.

The Recognition of the Future Entrepreneur, an award that rewards the best entrepreneurial project developed by children under 18 years of age from the Escola Emprenedors Foundation, has gone to the CTRL Audiovisual Project of the 3rd ESO students of the IES Salas and Xandri de Sant Quirze del Vallès. AIJEC Joves Empresaris wanted to recognize the entrepreneurial spirit of this group of 15-year-old boys and girls who have developed an online company for video and video game creation training courses.

The president of AIJEC Joves Empresaris, Ruben Sans Solsona, wanted to highlight the vision of the future of young entrepreneurs, who “from an idea decide to invest their professional and personal lives in creating solutions to improve society”.

Sans Solsona, in his speech, lamented the lack of recognition of what the figure of the entrepreneur continues to enjoy, but stressed that this “does not alter either the vocation or the desire to undertake” of entrepreneurs. And he has also had time to demand clear policies to support entrepreneurs, legal certainty, help to give visibility to companies and that European funds reach the entire Catalan business fabric, regardless of the size of the companies.

Finally, Ruben Sans Solsona wanted to send a message of optimism in the face of the adversities of the last year and a half: “The crisis is in the eyes of those who do not see the opportunities and we young entrepreneurs have amply demonstrated that we see the opportunities.” For the president of AIJEC, the covid crisis has positioned young entrepreneurs as “experts in turning setbacks into allies.” Vision, desire and modern and innovative ideas are AIJEC’s recipe to overcome any situation.

The award ceremony for the XXVIII Young Entrepreneur Award has also served to celebrate in person the 35th anniversary of AIJEC, the first employers’ association for young entrepreneurs in Catalonia and founder of CEAJE, the Spanish confederation of young entrepreneurs, which celebrates its 30th anniversary that same year. The entity was born in 1985 and since then it has established itself as a reference association for young Catalan entrepreneurs. The covid had not allowed to celebrate this event in person.